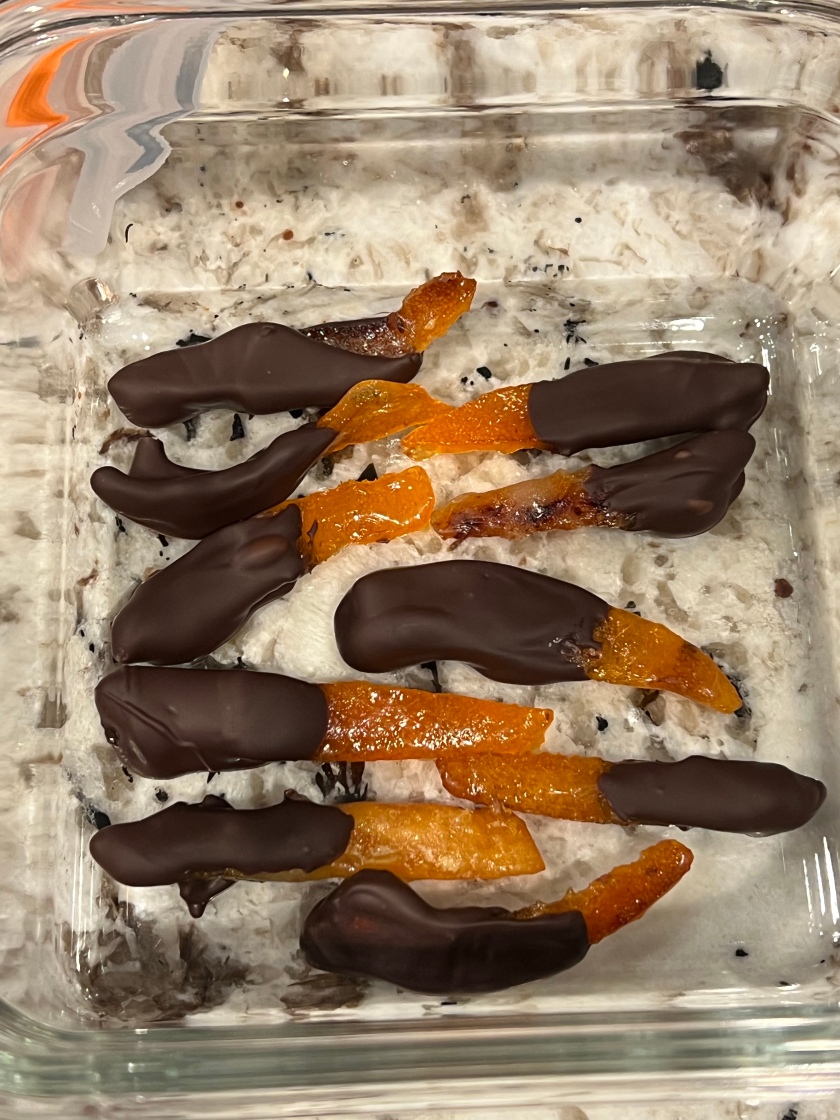 I have been having a bit of an “orange-a-palooza” week. I am drying orange slices to use in decorations (blog later), making mandarin jam (recipe link to previous post below), and one of my favourite treats: chocolate-dipped candied orange peels. Also an incidental snack made it’s way in….

If you have not tried chocolate-covered orange peels before, they are a sweet/bitter combination of chocolate and orange. We found them in a shop last Christmas, but they are not carrying them this year – soooo, I thought I would like to try making them. We have been enjoying a bag of clementines so I thought I’d do a test batch with the peels. They turned out a bit crunchier than the ones we get commercially, but they were good, especially once coated in dark chocolate. I think they would last reasonably well, but truthfully cannot say for sure because they disappeared by the end of the second day….

Here is what you need:

2. Bring the sugar and water to a boil, then add the skins and gently boil for 12 minutes.

3. Set them out on a rack individuality and let them cool/harden for an hour . At this stage they were very crunchy, but improved with the addition of the chocolate.

4. Dip one end in chocolate and set them to harden on a sheet of parchment paper.

5. Let them fully harden before putting them in a container.

If any of you have read the children’s book “If You Give A Mouse A Cookie”, you will understand how this goes…

I had a bit of melted chocolate left from the orange peel project. To use this up, I dipped some dried apricots in the chocolate, then in some chopped pistachios. Let them set on parchment paper until firm. Delicious! They were really easy, and looked quite nice!

Since I had leftover clementines, I also made a batch of jam substituting them for mandarins in my mandarin jam recipe. It resulted in a stronger marmalade flavour than when made with mandarins, which is especially good on toast or on Christmas breads such as panettone. I made a small batch for fresh use, so did not process in mason jars this time.

You can find the RECIPE FOR MANDARIN JAM HERE

Next blog we will dive into dried orange decorations! See you then.